SSC JE Exam Pattern and Selection Procedure: Staff Selection Commission SSC is one of the most famous government departments in India. And they always notified new recruitment at many levels such as SSC CGL, CHSL and so on. 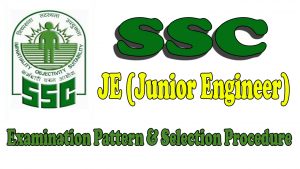 SSC is known as Karmchari Chayan Aayog in Hindi. It’s hold full responsibility of candidates to liberate jobs for the various government department and subordinate offices.

Here we Share Information about SSC JE Exam Pattern and Selection Procedure. With these Information you can Easily prepare for the SSC JE Examination. So Read the all information very carefully.

SSC JE Examination will divided into two parts. The examination will be organized based on the latest pattern decided by Staff Selection Commission. The First Pages will be of 200 Marks where as Second Paper will Carry 300 Marks. And the total 1/4th marks will be deducted for each wrong Answer.

So we Suggest you answer only those Question who’s you know it’s a right answer another wise you can leave them because if you fill any wrong answer on the answer book then you can lose your Numbers. SSC JE Exam Pattern

According to the SSC JE Exam Pattern by Staff Selection Commission, the appearing applicants for the post of JE (Civil), JE (Quantity Serveying & Contract) should attempt Part A of Paper I & II.

There will be two stages for the selection of candidates. The Candidates must have to obtained passing marks on the I Paper for being selected in SSC JE II Examination.

If you are Selected for the Second Paper Examination then there also you need to Qualified at least with passing marks. These two stages are given bellow:

The Final Assortment of application will be confirmed on the basis of Obtained Marks by the aspirants in Both Paper- I and Paper- II.